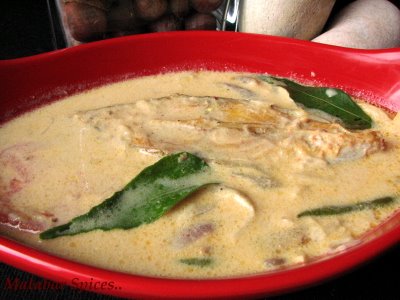 Fish molee is a very light fish stew, flavored with coconut milk. Maybe the name 'molee' is derived from the spanish word "mole" which means stew. Central kerala had a flourishing trade with the Portugese in the olden times, so a cultural exchange and local ingredients may have resulted in this recipe.

The stew derives its characteristic taste from the freshness of the fish, the coconut milk and the black pepper. Compromise on one and it becomes a cloying imitation of a fish curry. I wouldn’t recommend trying this stew with the canned coconut milk at all. The canned coconut milk has the stale aftertaste of rancid coconut oil, whereas anyone who has used the milk from fresh coconuts will vouch for its light taste and texture. If I don’t have fresh milk, then I use the coconut milk powder and mix it in low fat milk instead of water to get a creamier texture.

This is the Malabar version of the stew, with a little bit more spice. Traditionally made for breakfast with lacy pancakes (appams) or bread in south Kerala Christian homes, we have it with rice breads (Pathiri) or steamed rice cakes (Puttu) also. My mom fries the fish a bit so that it doesn’t break up in the cooking process, and now I like the slightly crisp flavor of the fish as opposed to the raw fish cooked in the stew.
And it does taste excellent with the rolls here.

Try it both ways and let me know which one you would vote for. I make it with black pompano(Pomfret) fish but any fish cut thin without too much skin should be good. The skin would give it a bitterness. It can be even made with shell fish or shrimps.

Preparation:
1. Preparing the Fish: Clean and slice the fish. Wash it and toss with lime juice. Pat dry the fish with paper towels and marinate with the salt, chili powder and turmeric for at least 15 minutes outside the refrigerator.
Heat the oil in a shallow pan till medium hot and gently pan fry the fish fillets for about a minute or two on each side, just until it changes color and firms up. This step can be skipped if the fish is very delicate or if you are using skinless fish fillets. Drain onto paper towels and keep aside.
If using fresh or frozen grated coconut, make two extractions of coconut milk. First extract 1/2 cup and then second 1 cup. Thin coconut milk is the second extraction with shredded fresh coconut and water which is considerably thinner than the thick milk from the first extraction. Keep aside. Slice ginger, garlic and onions. Slit the green chilies and chop the tomato into quarters.
2. Stew: Heat oil in a pan and sauté sliced onions, garlic and ginger, curry leaves. Add the coriander powder and continue stirring for a minute. Add the second extraction of coconut milk, lime juice and salt to taste. The thin diluted coconut milk will not separate, so when it starts to boil, add the sliced fish and cover. Cook on a slow heat for about 5-10 minutes.
When done, add the tomatoes and pepper; check taste and remove from the stovetop. The tomatoes should not get cooked and the pepper added in the end gives it an irresistible aroma.
3. Ensure that the heat is absolutely low or even off, before adding the thick coconut milk or first extraction of coconut milk. Do not let it come to full boil after that. You could continue simmering for another 5 minutes.

I use the claypot (Meenchatti) which holds the heat and continues the cooking even after I take it off the flame. Remove from fire and serve hot.
This curry’s taste is hinged on the fresh flavors so it may not taste the same the next day. This is not one for the long haul.

P.S. You cold even replace half the coconut milk with low fat milk to reduce the cholesterol factor. If it is good quality coconut milk, once the flavor is set, adding a lot more (for more gravy) will not increase the flavor.
Related Posts: Shynee's Fish Molee.
Fish Stew, Fish, Food Blog, Indian Recipes, Kerala Recipes
Posted by Shah cooks at 8:54 AM

Lot of spices for this fish!:)) Looks good and since I don't eat fish,I could make this with veg or chicken! Thanks!

fish molee with a spongy palappam and a cup of hot milk would be the real comfort food for me..i am so jealous that sombody in california eats all that delicious dishes everyday though she is far away from home.hmmm...hey thanks for the recipe...shaheen ,u can link any of my recipes any time ..

Now that looks yummy. We loove fish. I am sure my hubby would love this. Thanks for sharing Shaheen.

Hi Shaheen ,
Fish molee is new to me.. But i love dishes made with coconut milk and making it in a claypot will surely enhance the taste. thanks for the recipe.

The base recipe for Molee is so versatile and delicious, it is a keeper!

fish mollee is one of my all time favorites .
the only difference with mine is i don't add garlic and i temper it with cut n fried shallots and coriander leaves in the end.
and its one sure dish i mke when non malayalees come for dinner. everybody loves it.
n i hav been thanked by my friends, whoever i told abt ur blogspot after visiting it.:)
lov
ki

You know I always wanted to try molee...only I didnt have an authentic recipe. Just like its names (moily, moilee and what not) there seem to be as many recipes...I will try this and let you know Shaheen

Shaheen,
I like reading your recipes which always include so many useful tips. Friday I only eat veg (sometimes little fish), so will try out this stew tomorrow.
Last time I made your chicken curry really nice, will do it again too this weekend. Thanks for all these wonderful recipes Shaheen!

ASha: you could try this with vegetables..It does taste good.
MAneka: Thanks.he he ,I am in New Jersey..AN i am getting stomach ache due to somebody's "Kodi".:)
Shilpa: Do try..And Let me know.
Prema:I am so used to the clay pot now, I feel fish doesn't taste the same in a non stick pan.

Monisha:The base is a very versatile recipe. Do your own innovations to it.

Ashiwni: U are right.. they are lots of variations of this recipe.Do let me know after u try it.

GAttina/:It makes me beam when you say you tried and liked my chicken curry. Thanks a lot. The tips are from lots of experience of burning and destroying the taste.

ho!wish i could dip my finger in it! great recipe! great. is fish molee originally from kottayam or malabar? you know i think that frying part makes this curry different. otherwise it tastes like a fish in coconut curry, dont you think?

you know just a small suggn: if you leave a space between your paragraphs,it will be great. makes it much better to read.

also wanted to ask you, how do you get that smileys on your blogroll when the blogs get updated..thats really neat.

Shaheen,
I *heart* Fish Molee. My mom makes this curry but I've been intimidated by, what I think is a complicated procedure - the first extraction, the second... to try it myself, yours sounds easy. I can't wait to make this dish.

You have an awesome collection of recipes on your blog.

Inji: ur suggestion is taken.Thanks. Anything to make you read the whole way.:)
Yeah, the frying gives it a different taste than th eboiled taste..I have no idea which is th etrue fish molee. It has been known to be a christian dish back home, so I don't want to start a fight claiming it to be from Malabar.
As for the smileys, its from the blogrolling. Go to Blogrolling.com and sign up for updates.

Faffer: Thanks a lot.I hardly make it from th eextraction method now. Use the coconut milk powder and milk and the taste is just as good.

Hi Shaheen
Nice blog you have here
have always been looking for a fish molee recipe. i will def give this a try. am in the middle of a big move now... so def once i settle down.

Spice lover:Thanks and let me know when you try it.

i was just superb shaheen...thanks a lot...i loved it

i was superb. i loved it

Thanks to you, I got lot of good feedback from my friends. It was AWESOME

hi,
i just made it today with some cat fish fillets and it turned out awesome.
regards rema

I tried this dish yesterday and it was absolutely fantastic. Thanks for sharing!

First time to ur blog...You have lots of great recipes, here! I love this fish molee recipe of yours!:)

thank u for such a lovely recipe..i tried it yesterday wth sm changes..and it came out nicely.....planning to upload it in my blog...visit my blog..i got an idea of creating a blog , with all my experiment stuffs, came in mind only by seein ur blog...thank uu... :)

shaheen,
i tried the fish molee recipe and loved it..i've put a picture in my blog. Mine has different color..i think it's becoz i added more chilli powder and turmeric..
Deepa

Its my hubby's all time favorite dish.very yummy looking fish curry which makes me drool at the click:)
Thanks for the wonderful recipe.

Hiiii
read it,made it and ate it today itself......Yummyyyyyy
Thanks a lot

Coconut milk does not contain any cholestrol. On the other hand milk does.
Mathews.