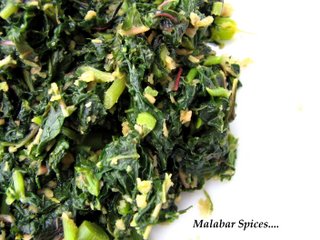 A thoran is a stir fry but with much less oil, sometimes even steamed partially. Spinach is a regular side vegetable on our rice menu. Most of the time, I make the stir fry with the Spinach available locally. It is easy to make, yummy and highly nutritious too(ask Popeye). But the spinach has more water content than the Kerala spinach and the end result is a wet thoran, unlike the crispy cheera thoran.
When I started my vegetable garden, I was so thrilled to find a plant called the Malabar Spinach which I had to plant. As it grew, I realized, it is a climber variety which is supposed to mature in 55 days and is also called a slippery vegetable, not to be confused with cheera.
Once in a while, I find the red green spinach in Indian and Chinese grocery stores which is the closest approximation to the Kerala cheera in taste. It is called Chinese spinach/ edible amaranth ...thin green leaves with red veins and red color in the middle. 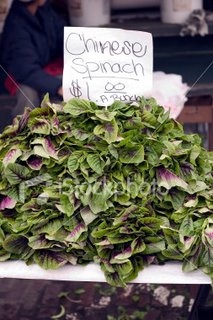 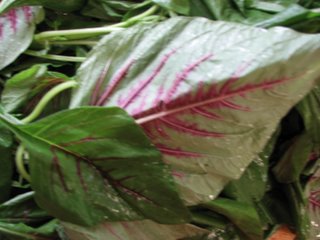 Preparation:
1. Soak the spinach in water for 5-10 minutes to get rid of the sand. Wash it well under running water. Let it drain thoroughly. Optional, mop up excess water with paper towels. Chop the spinach finely.
2. Pulse the coconut, chilies and garlic together without water in a dry grinder till it looks scrambled.
3. Heat the oil in a pan and add the shallots. Fry till it turns translucent and then add the spinach and turmeric. Keep the pan covered for a minute to wilt the spinach.
4. Make a well in the middle of the spinach and add the coconut mix and cover it with spinach. Let it cook uncovered on medium flame for 5-10 mins till all the water evaporates. Add salt and mix the coconut and spinach. Serve with rice.
Posted by Shah cooks at 9:28 AM

Chinese spinach is something new to me.....I don't have a chinese store nearby... will have to check it out somehow, as you've mentioned that it tastes like our Kerala cheera....I've tried Annita's swiss chard thoran... ...will try this also very soon. Oh BTW, I tried out your shrimp drumstick curry ,I and my family really enjoyed it...thanks again shaheen....you're doing great. Looking forward for more such mouth watering recipes from you. :-))
Thanks.
Rg.

wow, that's a pretty nutritious recipe..and I like the oil amount too....might make it the next time i get chinese spinach.

This is nice.... I make it the same but never tried with coconut. Will try your variation next time!!!