Time flies especially after leaving college and school. The daily grind of house, job and family has a way of making the day seem long but the years go by so fast.....and though you keep making friends, the intensity of old friends sitting up late at night, chatting, drawing, gobbling maggi, pretending to study while you discuss everything under the sun just can't be met so easily now.

Of course, once in a while we do come across some people we can talk to, without getting into a family friendship status but mostly now the pattern and the language of friends are mostly dictated by everybody in the family getting along well. 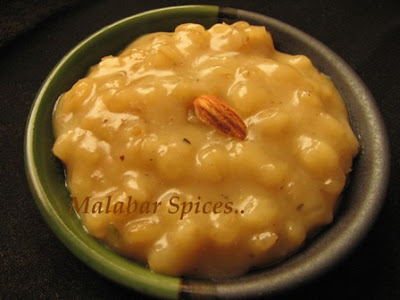 Godambu Payasam is a happenstance dessert recipe. My good friend had come over to visit me after 10 lo..o.o.n..g years during which time we each had got married, got kid(s)and still found time hasn't moved much from the hostel days. We could still talk despite being interrupted by our respective little ones. But we just kept tripping over the sequence of events over the years, Memento style.

We were meeting in Calicut and my mom was putting together a hasty lunch and was floundering for dessert. Then she remembered this payasam she used to have as a kid and in more recent times from her closest friend's house who is from the Telicherry side and made it regularly. So from one friend to another....
I remember liking it instantly thinking it is familiar but that I didn't remember mom making it often. We usually have this whole wheat as Godambu Veragiyathu which is the grains cooked with coconut milk and fennel and shallots and topped with ghee and sugar.

My friend liked it too and she kept requesting me to blog it but when I asked my mom, she said... add a bit of this, a bit of that.. and its only now when she came here, that I could pin her down to make make it again and again and take notes.

We loved the taste of the coconut milk and jaggery and the creamy wheat kernels which still had a bite to it but then thats just us. Whats not to like about jaggery and coconut milk? A lot of people are not fond of the same wheaty taste and dub it a poor man's payasam. So try it and let me know which camp you fall into. 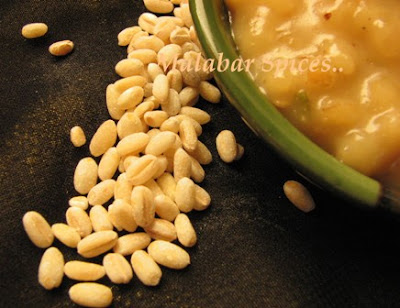 What is a whole grain?
Whole wheat grains contain all three parts of the grain intact:The bran, the endosperm and the germ. Some grains have a fourth part-inedible husk/hull. Whole wheat berries are wheat kernels that have been stripped only of their inedible outer hulls.

Skinned wheat are wheat berries whose bran is scrubbed off lightly...by hand or by machine. It's less nutritious than whole wheat, but more popular since it's not as chewy as hulled wheat and it cooks faster.

It is commonly used in the Malabar area and is available in as "Kuthiya Godambu" A reference to the way it was made in earlier days..by soaking, semi drying and then the bran is removed by hitting it in a tall mortar-pestle kind of equipment.(Ural..see this picture in Mathy's Kandasamy's site)It was done by the 2-4 women of the house, gossiping and alternately hitting the long stick...the same way Puttu podi used to be made in the pre-mixie days.)
There was an old Hindi movie by Gulzar which featured this ural activity charmingly. Click here to see it if you are interested.

The closest approximation to the skinned wheat here would be "pearl Barley" which has some of its bran removed too. So you could try this recipe with that too. Cracked wheat will give a similar flavor but not the creamy sago-like texture. The wheat and the milk will stand apart like new people meeting at a common party. Close but not blending in.

Soak 1/2 cup skinned wheat in warm water for 10 minutes. Cook it in a pressure cooker with the second milk of coconut till just before the first whistle comes. Try not to let the whistle blow... it makes the milk a bit agitated. Then lower the heat and cook for 10 minutes on very low heat. Open and check to see if it is creamy and cooked. Recook the same way for another 3 minutes if its not ready. Add more second milk or water if all the milk looks absorbed.

Once the grains are creamy and fully cooked (the whole mix looks opaque similar to cooked oats and tastes soft), add jaggery syrup and cardamom powder and a pinch of salt(literally a tiny pinch). Let it simmer for 5 to 8 minutes and taste it. When the sweetness is to your liking, lower the heat to a minimum and add the thick first milk. Let it simmer without over boiling.

My photo looks thick since it was taken on the second day after making the payasam so it thickened further. The consistency should be looser just as a regular payasam. So add the milk accordingly and adjust taste. The proportions are really up to individual taste. Some like it drop dead sweet and thick with coconut milk, I like it milder and a little lighter, so feel free to modify as needed. You could further fry nuts and raisins in ghee and add it to the payasam if you like that. 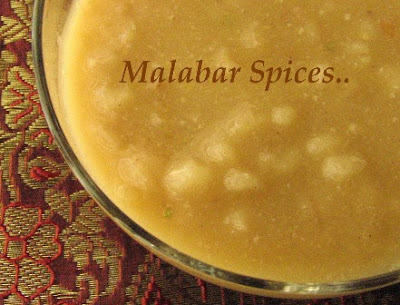 A first day consistency photo. The white specs are from the coconut milk I hurriedly made.
Coconut Milk: For two cups of thick coconut milk, I used 2 cups of grated coconut. From the same coconut, I extracted 4 cups of second milk. To extract the milk, first grind the coconut with just 1 cup of water and take out the milk.. then regrind it with water twice to extract the thinner milk.

This is my entry for the RCI-Kerala Hosted by my good friend Jyothsna of Curry Bazaar.

Related Links: Another yummy payasam made with Wheat..from Simply Spicy.
Posted by Shah cooks at 9:43 AM

Somekind of pudding.
I asked my daughter to guess and she said rice pudding :-)
Happy Newyear to you and family and especially to your little one.
Am on a break frm blogging till next week :-)

First of all a very Happy New year to you and the family.

I guess is looks like some kind of a "Kheer or Payasam" made of Chana or say kadala :)

I'm really bad at making guesde...but, is it sabudana pudding, by any chance?Well, I tried :-)

Is it Sago payasam Shaheen? I'm craving for some now, so I can see only Sago in this...hehe!

Reminds me of Godhamba payasam. My grandmother used to make it with wheat, I think, at special occasions. Although I may be wrong, the picture brought back some pleasant memories.

sago payasam/tapiaco pearl alengil this has got to b wheat payasam..!!!! ; )

A dessert with sabudana in it???

a sweet dish with chickpeas....

Missed these posts of yours : ). Hope you and your lil one is doing well inshaAllah..

Hmmm.... looks like " Chakkara Chor" to me. Rice cooked in jaggery?

i am guessing papaya! and i am hoping you will send it across for AFAM :D

thanks!!!!!!!!!
looking forward to the recipe.
me back in kl after my holidays.
wishing u all a very happy new year!
lov
ki

I thinks its the chana dal payasam - made with coconut milk , chana dal and jaggery. Am I right?

Happy new year girl!:)
Looks like Sago kheer to me or may be Quinoa!

I think it is a kheer (payasam) made with whole wheat grains and coconut milk and jaggery, with some almond garnish. Whatever it is, looks yummy.

hi...i am ghost reader farah from kannur, just two hours from your place. At present ,i'm in Saudi. I enjoy reading through your blog. It is a trip down food nostalgia for me.
my guess for your item is barley with jaggery payasam. a wild guess, no laughing !!

It's payasam - made up of either dal or chickpea?

Rice or Javvari Payasam with sarkara..Thickened version of Adaprathaman??
For Sure it is a sarkara payasam!:)
(good thing you had moderated the comments or else the naughty little girls out there would have all copied mine..) ;) ;)

This was easy but again most of us couldn't hit the pot..

Thanks for playing the guessing game. It was fun this time since i moderated the comments and the cat didn't get out of the bag too soon.I know some of you were taking relaly wild guesses, but Sha, Maneka, Nupur, Sig, Creating humus.. got it right. I would even say Barley was an ok guess since they come out similar but Asha, seriously Quinoa.. u just gave me a idea there!!:)

Bharathy, whats javari? And yes, it seems easy but when u start guessing it can become anything.:)

I wouldn't have guessed this! You want to send this to RCI-Kerala?

Happy New Year Shaheen! Great to see you blogging more regularly! Missed out on the game - but I would not have made it. Looks delish!

Wow i even didn't think about godambu.
It is atleast 18 years ago i had them.

i love godi payasa shaheen. i like it chilled... thick chilled payasa...mmm.. i can almost taste it:)
happy new yr to u although little belated:)

Hey remember i made godamb payasam and added fried ripe plantain to it..i can still remember the taste. Love godambu payasam. Will try your mom's version now. I am all in for the wheat for all its goodness and taste :)

Wow I have a packet of goduma sitting in my pantry.. Got 2 recipes - I loveeeeee jaggery and coconut combo - So I am sure gonna try it.

Waiting to see some of your Velu mess specialities !!! long time man !!

Shaheen..loved the write up and neat explanation abt wheat grain! Tks and I m going to try this kheer out today and feedback tom! Tku for sharing!!

Javvarisi(tamil)=chavvari(mal)= Sago or tapioca pearls :)..I accidentally combined the two :)..

Something more funny was that, I clicked "search" after typing Sago and your Sago payasam page appeared!!I dint know that you had blogged that earlier :)

very new to me, have never heard of a wheat pudding. It looks so appetizing. Or is it?

Hey, I just tried this recipe, and the Payasam came out awesomeeeeee!!!!!!
Thxx a ton!!

Hey shaheen....I just posted one recipe for another wheat based payasam....just check out to see if you are familiar with it...This one we call chakkara chor, but we add sugar instead of jaggery!....and yeah, that pearl barley dint work for me dear....It would ever get cooked. I wonder y!
BTW, how are u doing?