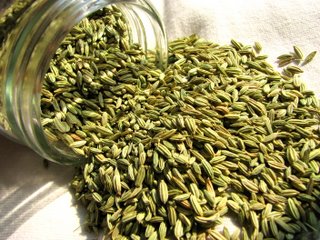 Perunjeerakam is a essential item in my pantry. If you follow the malabar mappila recipes, almost every item gets its distinct lingering taste from the perunjeerakam. Omit it and the flavor changes dramatically.
So when somebody commented that the english word for the spice is fennel and not aniseed, I had to look it up. Was I misleading in my recipes? Not to be confused with star anise, a star shaped dried spice which also has a lovely minty flavor and tastes great in Ghee Rice. It is dominant in Chinese All spice powder and recipes.
Furthermore, the local Indian grocery store had both spices sold seperately. They looked similar, aniseed being a darker olive green than the leaf green of fennel(saunf) but they smelled the same.
So what was the difference? The Wikepedia and Cooks Thesaurus say they belong to the same family but that aniseed has a stronger licorice flavor. Aniseed is mostly used in Middle eastern recipes and flat breads. Maybe, it would taste great on our naans. The aniseed oil is used in a lot of drinks and as flavoring in candy. The fennel bulbs and leaves are also used in salads and soups. So, I concluded that I use the lighter green fennel at home, but this meant that I could replace that with aniseed if I wanted to deepen the minty flavor.
The Indian recipe sites list both as saunf/Perunjeerakam but they probably mean fennel seeds.My mallu cookbooks always referred to it as aniseed too.
Any comments on this from all our foodies?
Posted by Shah cooks at 8:57 AM

Shaheen, I had the same trouble once. A lady asked me how come I use ani seeds when I am from South India bcos ani seeds are famous in North. I said we use it a lot, then she tried the recipe and mentioned 'anise seeds'. I was totally confused :(. Now I use the name fennel seed everywhere.
Thanks for the lovely info you have provided here.

I did notice that u had used Aniseed for fennel seed but guessed that you would have meant fennel seed...sometimes the names are confusing...

Fennel is the one we use as a spice, while aniseed is the saunf we eat as a mouth freshner (in suparis, sugar coated...!) Aniseed is smaller, and has a more delicate flavour and is also more expensive.
I was pleasantly surprised to find out that Malabari cuisine uses this spice a lot, as does Kashmiri. You cannot cook Kashmiri unless you are stocked on this. Does it grow on the coast?

anita,it does grow on the coast, and u are right, kashmiri food also uses a lot of it. that too has some delicate flavors.
shilpa, i know exactly how u felt.:)

Having studied Botany long ago and being a cooking enthusiast no encyclopedia could help me to learn the difference. Your article has done it. Many thanks for sharing the knowledge.

with all the confusion about fennel and aniseed i decided to dedicate some cyber and supermarket time on the matter. Fennel seed-perimjeerakam-Badee saunf(in hindi)
aniseed-karimjeerakam-saunf(in hindi)
in any indian supermarket youll find two types of saunf packets. one with bigger and fuller grains and one with smaller grains both labelled under saunf.biggere one is obviously PERIMjeerakam and smaller one is hopefully(fingers crossed) the elusive aniseed.

Just noticed the comment above. Aniseed is not Karimjeerakam (Black Cumin). It is mostly known as Saump itself in Kerala.
KarimJeerakam or Shah Jeera or Black Cumin is used in North Indian Biryani recipes. Though I don't think it's commonly used in Kerala Cuisine.

easiest way to confirm what is in your pantry, plant it!